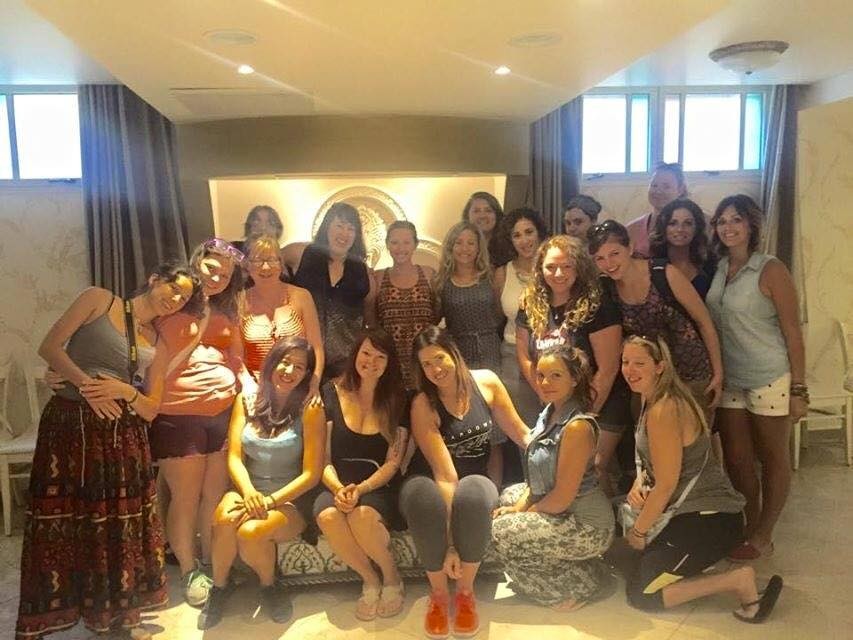 Waking up this morning in Tiberius I knew it was going to be an extremely tough day, it was officially the last day of this amazing journey through Israel with so many new friends and even more memories. Day Ten of wandering through old cities, shucks (markets in Hebrew), museums, and on cobble stone paths that make Israel such an amazingly beautiful home for some and a beautiful vacation spot to others.

As a group we spent the day in Tzfat, our first stop was to a Mikvah. The girls and boys were separated as we walked into a beautifully decorated building. Honestly, before this I had never even heard of a Mikvah. There we met a pretty interesting women with many jobs, not only was she taking care of a family of nine children and a husband, but someone who also has their own business. The woman who was also very strong willed and goal oriented. She told us about growing up in New York and going to an all women’s school for Jews. She explained to us how exactly the Mikvah works. Once a month after a woman has finished her menstrual cycle, she will come to a Mikvah to cleanse her body. What I thought was so amazing was that this facility in particular really catered to their clients. Not only was it state of the art with the most amazing artwork, furniture and even wallpaper I have ever seen, but they really wanted to be able to make it comfortable for everyone. The particular room the lady showed was even handicap accessible. Again, this is a very advanced Mikvah, but it was still really amazing to me that no matter what the situation was they were prepared to welcome everyone with open arms. Nurses were on staff at all time for even particular people who may be a little afraid of what they are enduring or may just even have a fear of water. I love seeing so many people, especially women come together as a community for something so important in the Israeli culture. I am not quite sure what the boys did when we were separated, although I heard a few stories about it.

Walking around in Tzfat was a little surreal, everything is much older but when I think of old cities I think of the older style architecture. Our tour guide, Gadi, always likes to show us these pretty incredible places when he could so before lunch we made a quick stop at a Safardic temple. These types of temples are different simply because the bimah, where the rabbi stands is in the middle of the room rather than in the front. They had some amazing artwork inside which was pretty mind blowing. It was simply stunning.

After the temple it was lunch time. No offense but on day ten I just can’t eat any more falafel and hummus. A few of us went walking for something a little healthier and out of the corner of our eyes we see the sweetest looking older man yelling something about the best food and drinks (and it was vegetarian). We were given a homemade pita that was so warm and soft, it was so delicious stuffed with five different cheeses, tomato and cucumber, with their “special” ingredient. A little red headed boy who couldn't have been more than twelve was making mine in particular from the group and he couldn't have been any more adorable. The best part of the meal was their special drink called, got. (I have no idea if that is how it is spelled but it was absolutely delicious.) Everywhere in Israel they have iced coffee, but this was an iced cocoa plant based drink. It was so delicious. I got to spend the meal with some amazing people with some amazing food. I don't think it gets any better.

Later in the afternoon we got to do one of my favorite things- shopping of course! There were only about sixty to seventy shops, but that kept me busy for a few hours. The jewelry and the artwork were so beautiful, and we all spent way more money than we all brought. I have so many pieces of art that I can wear and hang on my walls that I can keep for my lifetime. I know that every time I look at them I will think about the amazing time I went to Israel.

To finish off our day we went to see a man named, Abraham. He taught us about Kabbalah. He was probably everyones favorite part of the trip! He was so cool and laid back and really thought about how the world works through the ways of a very relaxed state of mind. He was an artist whose paintings really made you think and look at art in a whole new way. He made artwork based on sound waves. It was all so different, but so cool at the same time. Personally, I bought three paintings. One for instance was a hebrew letter in black over a white background and the other half of it was the same letter in white with a black background. Basically the meaning behind it was what gets left behind and what you take from something once its moved around. It’s so powerful to see the point of view from someone else when you are introduced to something so different, and how much it touches them. Half of the time we were there I played with his 5 year old son, who could not have been any cuter. To say the least it was a pretty magical day.

Coming back to the hotel at night was bittersweet. All I could think about was how I didn’t want the day to be over because that meant it was getting closer to having to say goodbye to my roommates who were both extending their trip. We talked all night as a group about how others have impacted us and even gave out awards to everyone. We laughed, I cried, as usual. It was just the perfect night to a perfect trip and I feel so blessed and lucky to have met each and every one of these people. They were all on this trip for a reason and there are so many things I learned from everyone. Like I said it’s sad to be saying goodbye, but it’s honestly not goodbye, it’s a see you later, I’ll text you tomorrow, and we will Facetime next week so I can see how you are. This trip came at such a perfect time in my life and it is something I will never forget. I only hope I made an impact on others like they did on me. (MORE THAN IMPACT! ;))