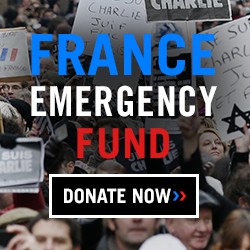 We all watched in horror last week as Islamic fundamentalist terrorists brutally murdered 17 innocent people, including 4 French Jews in a Kosher supermarket, in three separate attacks in Paris.

Our Jewish Federation immediately sent emails of our condolence and support to our brothers and sisters in France to Ariel Goldmann, President of the Fund Sociale (FSJU) and Roger Cukierman, President of the Conseil Representatif des Institutions Juives de France (CRIF); the two largest umbrella organizations of the Jewish community in France.

Our Hillel Jewish Student Center at UNLV, with the leadership of Bailey Brenner, Hillel Student Vice President and Matthew Kramer Morning, our Hillel Director, organized a community vigil on the campus at UNLV which was attended by more than 100 students, faculty, community members and leaders of other faith groups in Las Vegas.

Over the past week the Jewish Federations of North America (JFNA) has consulted with representatives of the FSJU and CRIF, as well as the Jewish Agency for Israel (JAFI) and American Jewish Joint Distribution Committee (JDC), as to the Jewish Federation movement’s response to aid the Jewish community of France.  It is clear the community will need support with regards to safety and security, social services for the victims and the community at large as well as assistance for those French Jews who choose to make Aliyah to Israel.  While specific plans are still being made, JFNA established a special Fund for the French Jewish community in anticipation of our collective response.

The Executive Committee of our Jewish Federation unanimously agreed to make an emergency grant and allocate $5,000 to the Fund for the French Jewish Community as a demonstration of our support and solidarity on behalf of the Las Vegas Jewish community.

The Jewish Federation will also be accepting donations designated specifically for the Fund.  Those wishing to make contributions can do so online at:

The Jewish Federation continues to liaison with local law enforcement officials in Southern Nevada with respect to the situation in France and around the world in order to determine responses for safety and security in our own Jewish community.  At the present time, law enforcement officials report that there are no credible threats in Las Vegas and continue to emphasize that all Jewish organizations remain vigilant.  They encourage everyone to heed their call:  See Something, Say Something.

We will continue to monitor the situation in France and will keep the leadership of our Jewish community informed as to developments.  We invite you to join us in supporting our family in France; and greatly appreciate your support and assistance.