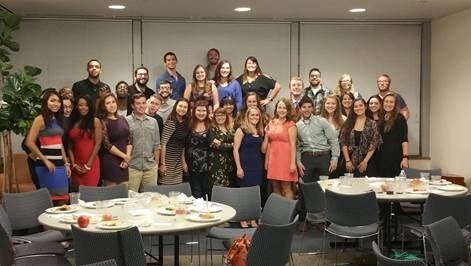 The Paradise Ballroom in the Atlantis Casino Resort was full of community members, donors, families, and music lovers Sunday evening as they gathered for a special concert featuring first concertmaster of the Berlin Philharmonic, violinist Noah Bendix-Balgley. Accompanying him were harpist Marina Roznitovsky Oster and pianist James Winn. The eclectic set list included a beautiful harp solo by Roznitovsky Oster, a Brahms duet with Bendix Balgley and Winn, and even some Klezmer that clearly appealed to the Jewish heritage shared by the performers and much of the crowd.

Before the concert, Zachary Alexander, Director of Hillel of Northern Nevada, addressed the crowd, welcoming everyone and giving special recognition to student Zachary Brounstein, the former senator for the Associated Students of the University of Nevada and Hillel student who passed the legislation in defense of Israel's right to exist and defend itself. Brounstein received an immense round of applause.  "It was an incredible honor to be cheered by that many mensches of the Reno Jewish community at such a huge event," said Brounstein. "It makes me feel as if I have left a legacy on my school and community." Brounstein is expected to graduate this May.

The program itself was very special including selections of Jewish music not often heard in a recital hall with such accomplished musicians. Noah Bendix-Balgley even got the audience to sing along in one of his Klezmer pieces. The mood was celebratory before, during and after the concert. It was a social, and of course cultural, event for the Reno Jewish community. At the end of the night, Hillel estimates raising over $36,000 in ticket sales and donations.

Hillel of Northern Nevada's board of directors worked tirelessly to plan, market, organize, and execute the event. Thanks to the help of Catherine Farahi, Sue Liebman, Marilyn Roberts, Hillel students, and the Atlantis staff, Hillel took a large step toward ensuring a lasting impact for Jewish Students attending the University of Nevada Reno.