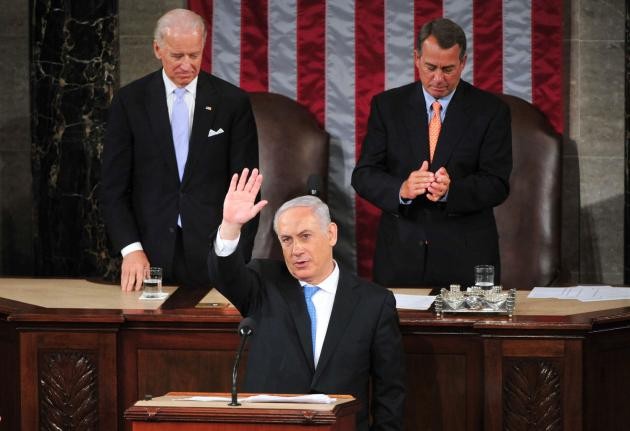 I had the privilege today, together with David Stone, to attend Prime Minister Netanyahu's speech to a Joint Session of Congress.  I am indebted to both Congressman Joe Heck and Congressman Crescent Hardy for inviting David and I to attend the historic presentation by Israel's Prime Minister to the members of the United States House of Representatives and United States Senate.   It was a very unique opportunity to attend a special Joint Session of Congress in the chambers of the House of Representatives amidst the pomp and circumstance of the Prime Minister's visit to Washington.  I am so very proud that each member of Nevada's Congressional Delegation attended the Prime Minister's speech; and that the Prime Minister went out of his way to acknowledge Senator Reid's presence in the Chamber following his recovery from his recent accident.   It was also a special moment in time as American Jewish leaders from across the nation gathered in the Chamber for the speech including Nobel Laureate Elie Wiesel, former United States Senator Joe Lieberman and representatives from each and every major American Jewish organization. What made the program even more meaningful were the number of non-Jewish friends of Israel and the Jewish people who were also present to pay tribute to the Prime Minister and to "stand with Israel" including Pastor John Hagee and Mrs. Joan Hagee and other leaders.   Prime Minister Netanyahu's comments were significant, prescient and very meaningful as I am certain you have already read in various media accounts, online and watched on the TV news.  The commentators and pundits will certainly have a lot to say in critiquing the Prime Minister's speech.  As an American Jewish leader, it was one of the proudest personal moments of my life and professional career to listen to the Prime Minister express his thanks and gratitude, personally and on behalf of the People of Israel, to the United States of America, the President and Congress and the American people for their unwavering support, friendship, alliance and strategic partnership for more than 7 decades; and for our nation's passionate commitment and dedication to the Jewish State.   As proud as I was as an American to hear the Prime Minister clearly state his thanks and appreciation, I was even prouder when the Prime Minister of Israel expressed clearly with resolute resolve and fervent belief that no matter what, even with the support of the United States of America, the Israeli people and the Jewish nation will forever stand free, democratic and strong on its own precisely because there is an Israel! That was Prime Minister Netanyahu's message...in addition to the threat posed by a nuclear capable Iran to Israel, the United States and the free world...the underlying message was that Israel will do whatever Israel must to defend herself against those who would seek to destroy the Jewish State and the Jewish people.  The symbolism of the Prime Minister's message was not lost on the Members of Congress nor the hundreds of people in the Galleries, myself included, when the Prime Minister referenced that his comments were being delivered just one day before the celebration of the holiday of Purim.  Nor was the Prime Minister's message any clearer when he acknowledged the presence of Elie Wiesel in the audience and how his words of "Never Again" must be the watchword for the United States, Israel and all freedom loving nations in combatting those who would seek to destroy Israel, the Jewish people as well as freedom and democracy throughout the world. The resolve of the Israeli people and of the Prime Minister were clear and unequivocal; as was the overwhelming support and commitment of most of the Members of Congress in attendance who rose repeatedly with enthusiastic applause to the Prime Minister's speech. Today, attending the Prime Minister of Israel's address to Congress, was a proud moment in time to be an American, to be Jewish and to be a supporter of Israel and the United States. As Prime Minister Netanyahu said himself at the conclusion of his remarks, "...God Bless Israel and God Bless America."