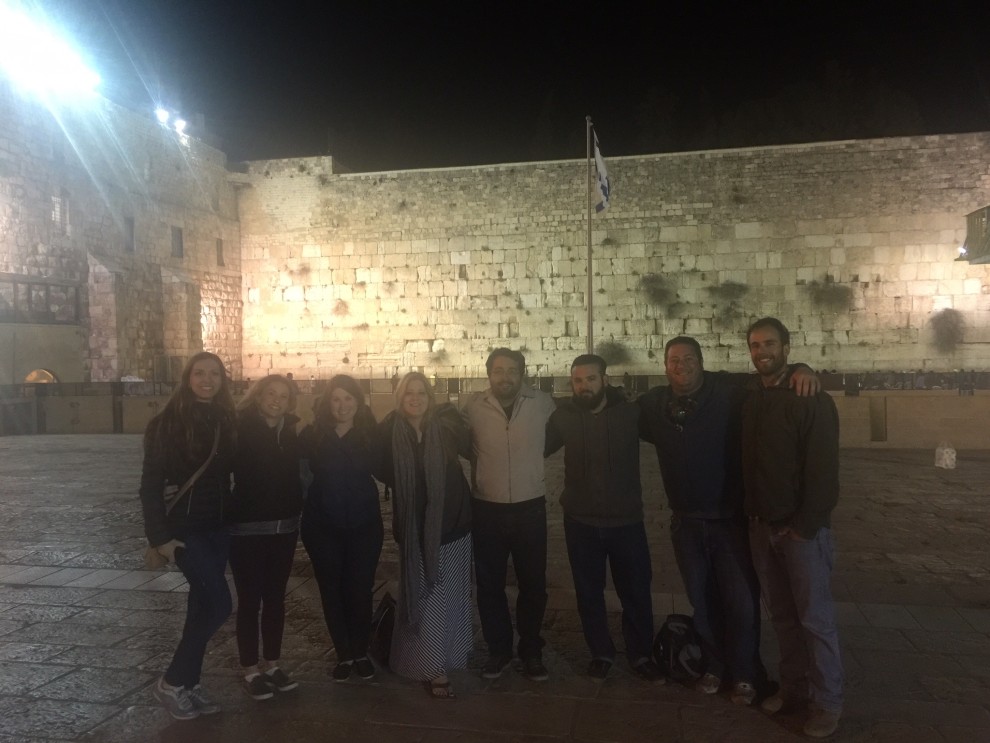 This morning started off very early at precisely 6:30am with a delicious cup of French press coffee from our gracious host Jon. In between gulps of coffee and bites of crisp pita with homemade cherry jam, everyone said bittersweet goodbyes to our comfortable and now familiar home in Ramat HaNegev. We all knew today was going to be heavy as we began our two hour bus ride into Jerusalem.

The winding streets that lead into The city are high up on a cliff overlooking rolling green hills, ancient villages, artistic synagogues and many many coffee shops. Some of us were napping while others were journaling or chatting, but everyone paused what they were doing to take in the breathtaking view.

When we arrived in Jerusalem, the city was so alive. Traffic and people filled the streets and sidewalks. The rows of tiny businesses stacked one on top of the other went on for miles. We passed impatient drivers that honked their way through red lights and families hustling their children off to school as we ascended to Mount Hertzl, also called Har HaZikaron, or Mountain of Remembrance. On the Western slope of the mountain sits Yad Vashem, Israel's memorial to all Holocaust victims. While there are acres of land, the main museum sits on a relatively small plot and is made entirely of concrete. The rooms are small and cold. Everyone is constantly being shuffled around. There is no where to sit. Every room feels like it's tilting to one side and you could fall over at any second and no one would notice. It's dimly lit except a small bright light coming from the other side at the top of the building. Every tiny detail is significant and has been meticulously included to symbolize the conditions and horror the victims experienced. Our tour guide Larry was an American from Brooklyn, New York and made Aliyah over 20 years ago. He explained important details of the entire Holocaust beginning with Hitler's rise to power all the way through to the liberation of the death camps. The entire delegation was silent throughout the tour, as there are few words that can begin to elucidate the senseless murder and torture of 6 million innocent lives.

The exit leads to a beautiful hill overlooking flower gardens and the entrance to the children's memorial. It is pitch black inside except the flames of the yahrzeit candles and the names and ages of every child lost is played on a constant loop.

The next stop was the Herzl memorial and military cemetery. We heard stories of Palmach Fighters, IDF soldiers, children as young as 10 years old, and Israeli leaders. On the top of the hill is the gravesite of Theordor Hetzl, also called the father of modern Zionism and behind is the Jerusalem National Forest.

After many tears and emotions, it was time for the delegation to decompress a little as we took a short bus ride to the markets and Ben Yehuda St. We ate delicious falafel and walked rows and rows of fresh fruits and vegetables, spices, candies, and tchotchke shops. We loaded up our newly purchased treasures and headed to our rooms for the night. It was here we were given the opportunity to meet other young adults from Ramat HaNegev living and working in the city with amazing stories to share. One woman started a non-profit for under privileged school children and another man was working as an advisor to the Mayor of Jerusalem, who is also the son of the Mayor in Ramat HaNegev, Mayor Riffman.

With this incredibly packed schedule, we still had to make it to the Western Wall. Just a quick drive down the road, our very friendly taxi driver got us there in record time with plenty of laughs included on the way. People were everywhere when we got to the outside of the wall. Everyone from tourists to residents of Jerusalem wandered the grounds hoping to get a space close enough to touch the ancient Jerusalem Stone. The powerful energy emitted from from the stones cannot be described in words, it must be felt in person with your own hands.

We walked backwards away from the wall and once again piled into taxis for our last dinner with our Israeli hosts.

We exchanged countless smiles, hugs, and tears and discussed future plans for the next delegation. We all know we have not only visited and learned about the magical place of Israel, but we have built special relationships and now have friends for life. Our hope for the future is to continue fostering this partnership for many years to come and we eagerly await the next group of Israelis to visit us in Las Vegas.