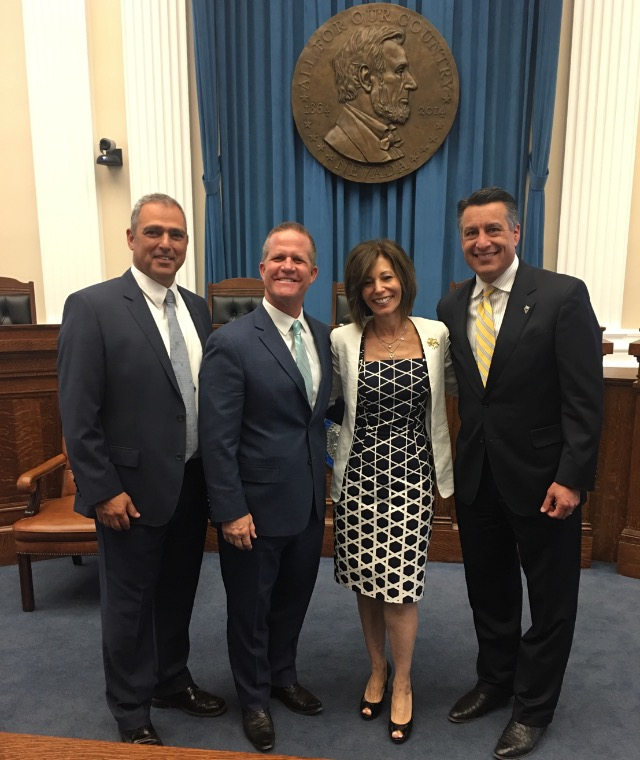 SB-26, introduced by Lieutenant Governor, Mark Huchinson, directly combats the Boycott, Divestment, and Sanctions (BDS) Movement and its global network of individuals and organizations who aim to isolate Israel politically, economically and culturally. SB26, seeks to ensure the State of Nevada is not a party, with taxpayer funds, to any discrimination in a state-awarded contract. This legislation will also be instrumental in furthering Nevada’s longstanding, deep, and broad economic and business partnerships with Israel.

"This is a terrific day for the pro-Israel community of Nevada as our state is now counted among the growing number of states that will give no quarter to the BDS movement. The signing of this bill sends a strong statement that the state of Nevada will not be a party to discrimination and that we stand with the United States greatest ally in the Middle East, Israel. Jewish Nevada is incredibly grateful to Lieutenant Governor Hutchinson for introducing this legislation, the state legislature for overwhelmingly passing the bill, and ultimately Governor Sandoval for signing it into law,” said Todd Polikoff, President & CEO of Jewish Nevada.

The signing of this legislation was a statewide, pro-Israel community effort that encompassed nearly every corner of our state.

“It was an honor to work with Nevada’s Lieutenant Governor Mark Hutchison and Assemblywoman Ellen Spiegel, as well as all of the other committed community members of this state, north and south. Together, we showed passion, commitment, and love for our beloved homeland and our people. I was honored to represent Jewish Nevada at the bill signing and show the world that Nevada does not stand for the discriminatory practice of BDS,” said Marla Letizia, Chair of the Board of Jewish Nevada.

Jewish Nevada (Nevada’s Jewish Federation) is the representative organization for the nearly 70,000 members of Nevada’s Jewish community. Jewish Nevada provides grants to over 70 local and international organizations; powering the agencies that make community possible. Jewish Nevada’s funds are utilized in support of local camp and educational scholarships, cultural programming, humanitarian missions, senior services, as well as rescue and relief services in Nevada, Israel and around the world.

If you would like more information about this topic, please contact Arielle Ventura at 702.732.0556 or email at arielle@jewishnevada.org.