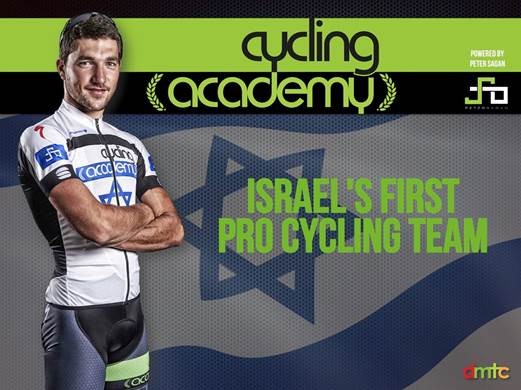 An Israeli cycling miracle: from the Desert to the the peaks of ColoradoThe Mayor of Jerusalem: I am confident the team will get American crowds support

Eight short months after its launch, Israel’s first and only professional cycling team is now facing its toughest challenge at the USA Pro Challenge.

Team Cycling Academy was pleasantly surprised to be invited to race at one of the most important and demanding stage races in the U.S., to take place in Colorado during the middle of August (17-23).

For the young Israeli team, the invitation to race against some of the world’s top professional teams comes as reward for a remarkably successful inaugural year during which it has won 13 races across Europe and Israel.

“We are excited for this special opportunity” said team founder and owner Ron Baron. “It’s not every day that you hear of a pro sports team from Israel, let alone competing at this level, side by side some of the world’s most gifted athlets.”

The team is expecting a wide local support during the race, especially from the Jewish community in Colorado as it will be the first time that an Israeli pro team will compete in the US. The mayor of Jerusalem NIr Barkat Who Hosted and supported the Team Inaguration said today that he is “Deligted that the team will be now racing in Colorado and I am confident that our friends overseas will stand by the riders and give them the support they need”.

In a way, it’s almost a fairy tale story or if one likes – not much less than a miracle – as Israeli competitive cycling is hardly surviving due a to lack of financial support, forcing its most talented athletes to give up their dreams.

Team manager Ran Margaliot (26) was among those Israeli cycling stars determined to fulfill the dream of becoming Israel’s first cyclist to compete at the world’s most prestigious stage – the Tour de France. A little over a year ago, after realizing that he himself will not be able to achieve this decided to try to provide young athletes with an opportunity to fulfill this mutual dream. “I knew if I couldn’t make it there, I had to at least try to help others achieve this, and at the same time help build a better structure for competitive cycling in Israel”.

In a small country with much more urgent priorities, the problem was obvious: lack of funding.

But then a small miracle occurred. Israeli entrepreneur and cycling enthusiast Baron was taken by the cause and decided to take upon himself to finance this challenging feat. In addition, he was able to enlist the support of one of the world’s top cyclists, Peter Sagan. Together they widened their mission and decided to promote cyclists from other countries as well, who like Israel, lack a professional cycling program and tradition.

The Israeli based team with an international array of riders – was inaugurated last December at an international level race taking place in the narrow streets of the Old City (Jerusalem). Since then the team has successfully competed at races all around the globe. The invitation to race in Colorado is viewed by the team as a reward for this hard work but as a challenge nonetheless.

“It’ll certainly be our toughest test to date but we’re going with the goal of leaving our mark at this race” said Margaliot. “Our hearts and souls will be put into this race and we hope to gain that extra boost from the excitement inspired by the large support of local fans”.