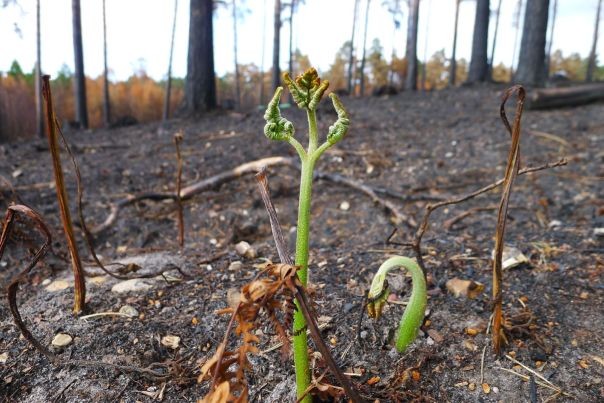 Lodgepole pine trees grow in areas that are prone to forest fires. These unique trees have a fascinating evolutionary characteristic in that their pinecones are tightly sealed with a layer of resin and woody tissue sticks that bind the cones’ scales together. The seeds are locked in tight, and the cones can’t open unless they’re exposed to VERY high temperatures–the type of temperatures that fire provides.  Therefore, despite the catastrophic impact of Forest fires, they are essential to the lifecycle to the Lodgepole pine.  These trees harness the power of the fire to create new trees and ultimately stronger forests.

As we celebrate Israel's 68th Birthday, I can't help but think of how much the Jewish people have in common with the humble, but miraculously ingenious Lodgepole Pine.  Like this unique tree, we have survived every fire of history from the destruction of the first and second temples, to the inquisition, to the pogroms, to the Holocaust.  We survived, because survival was not and is not the ultimate goal.  Merely surviving implies that our only goal is to stay alive.  But our goals have always been and are greater than survival.  Our goals are to continue growing, thriving and prospering - merely surviving is not an option.

It is this determination that has brought about the organized Jewish community in the Diaspora.  It is what brought our people back to the eternal home of the Jewish people, the State of Israel.  Striving for more than just mere survival is what has lead Israel to be the innovation capital of the world.   It is also the reason that Jews around the world are still being rescued and cared for by the global Jewish community.  Survival is simply not enough.  We must grow, we must go from strength to strength, generation to generation, L'dor va'dor.

We, as a Jewish community, are currently faced with a potentially ruinous threat - the spread of the blight of anti-Semitism that is spewed by the Boycott, Divestment & Sanctions (BDS) movement and its supporters.  This growing blaze is fueled by the absurd rationale that one can be anti-Israel, but not anti-Semitic. Additionally, there is adherence to the flawed calculus that places the ills of the middle east squarely at the feet of Israel.  These amateur carnival barkers claim through their megaphones that if Israel abandons the west-bank and the eastern half of Jerusalem that Iran will stop marching toward a nuclear weapon, that Hezbollah will destroy the tens of thousands of rockets aimed at Israel, and that Hamas will fill its tunnels with cement and start building an infrastructure for it's people in Gaza.  These are not merely the musings of first year college students with one international affairs course to their credit.  Former Presidents, well known political pundits, and those claiming to be experts espouse this view on a regular basis.

But here is what they haven't calculated - the resiliency of the Jewish people.  This is our not-so-secret weapon that is on full display with every simcha, every Brit and Baby Naming, every Nobel Prize, and every Israeli humanitarian mission.  It is the "X-factor" for which the enemies of the Jewish people can not account.  Hate filled individuals, organizations, and governments may kindle and fan the flames of anti-Zionist/anti-Semitic fires.  They may also succeed in destroying some trees, but they will never eradicate the forest that is the Jewish people.  We will continue to use the fire of their contempt as yet another opportunity to spread more compassion, knowledge, and co-existence into the world.

In an effort to exhibit this strength, I hope that you will join me at the Yom Ha'atzmaut (Israel Independence Day) celebration this Sunday.  The graphic below contains all of the information regarding the event.