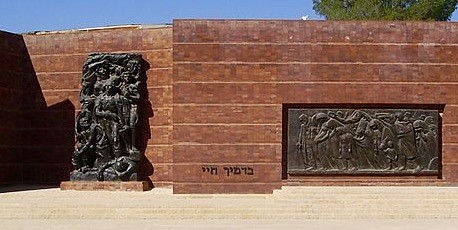 I have visited Yad Vashem a number of times and always find it to be an inspiring place that makes me thankful for my life.  At nearly every turn, with every sculpture, garden, and stone, the memorial teaches it’s visitors a lesson.  The segment of the memorial that I always find to be the most impactful are the sculptures by Nathan Rappaport found in the main courtyard.

When facing the main courtyard from the entrance, the sculpture on the right titled “The Last March” is carved on a flat panel and is recess mounted on a brick wall.  It depicts Jews marching with their belongings, hunched over, their faces filled with sorrow, grief, and fear.  The second sculpture, on the left, is a memorial to the Warsaw Ghetto uprising.  The memorial to the uprising depicts a seven figures, gathered around the central figure of Mordecai Anielewicz, one the leaders of the uprising.  This sculpture stands on its own, in front of the wall and depicts powerful faces of determination.

These sculptures are seared into my memory because they represent, to me, the dichotomy of the Jewish experience.  Set inside of the brick wall, The Last March represents a time when Jews were viewed as merely sheep to slaughter, relying on others (neighbors or governments) for security.  The Warsaw Ghetto uprising memorial represents the modern view of Jews as a people who are replete with and overwhelming sense of self-determination and self-confidence.  The Jews who will never again allow their existence to be determined by others.  That is why the Warsaw Ghetto sculpture stands alone, disconnected from the walls of Yad Vashem, not relaying on anything other than it's foundation for support.

The other significant aspect of these sculptures is where they, and Yad Vashem, are located - the State of Israel - the homeland of the Jewish people.  The place that embodies the vision of the self-reliant Jew who will fight for him/herself and not rely solely on others for survival.  Today the State of Israel is the difference between the Sheep to Slaughter and the Warsaw Ghetto uprising sculptures.

One would argue that our Jewish community today has more influence than we've probably ever had in history.  But the Jews of Austria, Poland, and Germany probably had the same thought in the 1920's and 1930's.  The problem is that influence is a perception that gives a false sense of security.  The biggest difference between our global Jewish community and that of the 1920's and 1930's is the establishment of the State of Israel.  On May 14, 1948, for the first time in it's history, global Jewry had a source of power.  The establishment of the State of Israel ensured that there would never again be a homeless Jew, a Jew that had to live under persecution, a Jew that did not have a community.

I am blessed to live in the greatest country on the face of the earth, The United States of America.  I am here today, for no other reason than, my grandparents made it here in time.  I am the embodiment of "There but for the grace of G-d."  I am truly fortunate, but if you think I'm overstating the impact that Israel has on our global Jewish community, simply ask the nearly 51,000 Yemenite airlifted to Israel since 1949, ask the 14,000 Ethiopian Jews airlifted in just 36 hours during Operation Solomon, and ask the nearly 10,000 French Jews who have immigrated since the attacks on the Hyper Cacher in 2015.  Without the State of Israel, these Jews would be forced to either move to another country that may provide security or live under growing levels of violence, oppression, and isolation.