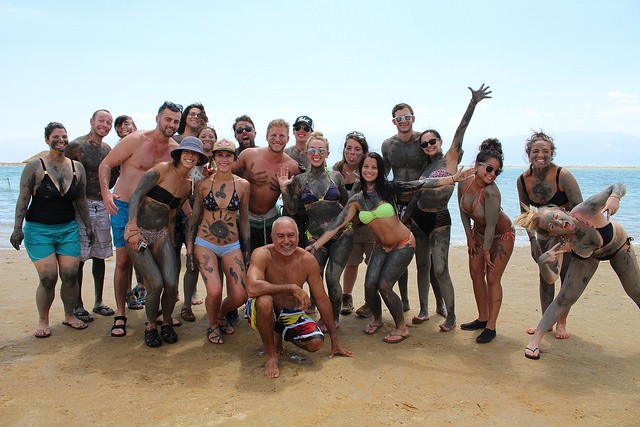 Monday night quickly turned into Tuesday morning. We left the hotel in Arad at 3:30 am and rode the bus over to one of the most breathtaking places I have ever seen. We started the hike up Masada on the Roman trail. By the time we reached the top, dawn was upon us. As we sat and listened to Shabat describe the tale of Masada, the sun began to rise. We enjoyed the start of the day with the picturesque scenery. Shabat led a tour of Masada and described the history with much enthusiasm, as he has done all week long.

After taking the snake trail down with the sun beating, we enjoyed breakfast at the tourist center. From Masada we took a short bus ride to the Dead Sea. We covered each other from head to toe with the mud from the sea and effortlessly floated in the clear blue water. The experience was like no other.

Our journey continued from the Dead Sea to a kibbutz where one of our Israeli soldiers spent his life before the army. The community was nothing but welcoming. They let us enjoy their pool and took the time to talk with us, answering any and all questions we had for them. The members of the kibbutz continued to show their hospitality with a variety of fresh fruit. I never wanted to leave. The kibbutz community is unique; everyone works together and gives back to their community showing their effectiveness in being self-sufficient.

Community seemed to be the theme of the day as we continued to a Bedouin community. As we turned off the road towards the community the differences were immediately apparent. The paved highway turned into a dirt road. As we turned the corner, we saw the tents that would be our home for the night. After dropping our bags we were immediately greeted with in classic bedouin tradition. A man named Salem played the Sitar for us and offered us traditional Bedouin coffee ground by hand. He continued to explain this tradition and showed us how to grind the coffee and gave us a crash course in all things Bedouin.

Next was the camel rides. Two people per camel and a 30 minute ride around the desert followed by the best meal we've had so far. The Bedouin dinner was fantastic. Groups of five sat around a giant plate of food the Bedouin cooked up. The homemade food was delicious and filling and combined with the atmosphere, absolute perfection.

After dinner our group got together and began to walk into the desert away from any form of light. After a very long but exciting day, the atmosphere could not have been more spot on. Tonight, our group connected unlike any time before and getting to know one another on an even more personal level is something I will treasure forever. This group is filled with the most interesting, unique, talented, and wise individuals and I am forever grateful for this memory I will share with them. Watching the sun rise and the moon rise both in the same day with these phenomenal individuals will remain with me for the rest of my life.