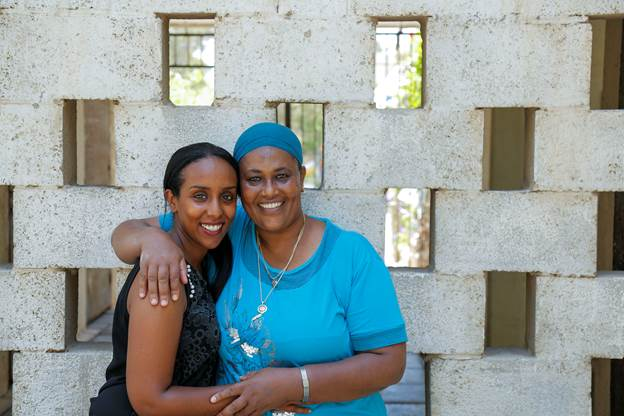 Orit with her daughter, Rebecca. Photo: Nir Kafri for The Jewish Agency for Israel

A soon to be published blog post on The Jewish Agency’s Voices Blog. Note our coverage below in the Atlanta Jewish Times about our activities supporting the Ethiopian community in Yokneam, Atlanta’s sister city, through Partnership2Gether.

“When there were just two days left to get to Sudan I started feeling sick and I collapsed,” Orit recounts on her grueling journey to Israel from Ethiopia. “Friends, one on the right and one on the left, dragged me all the way, for two days, day and night.”

Orit immigrated to Israel as part of ‘Operation Moses’, which aided the arrival of 6,364 Jews from refugee camps in Sudan to Israel, via intermediating countries, by foot, planes, and boats. Now working as a counselor and assistant at the Hanita absorption center, founded by The Jewish Agency, her journey was one of bravery and perseverance.

“My aliyah [immigration to Israel] started with the youngsters, without our parents. The trip was hard, without water or food. After a few days of walking, six days and nights, we were about to enter Sudan. When there were two days left to get to Sudan I started feeling sick and I collapsed. They tried to treat me, to help me. They drew blood in order to reduce the pressure and I lost consciousness. My cousin, who was with me, heard me saying: ‘I am dying. Go with our friends. I’ll stay here.’ When he heard that he called for help.”

Finally making it to Sudan, Orit recalls, “I was at the refugee camp for four months and I saw the tragedy of the dying children. It was very hard. Every day 10-20 people died, because of the food and the neglect. Eventually the Air Force plane arrived, the soldiers led me and my friends to the plane, and we boarded on our way to Israel.”

By the end of the 1970s, Jewish immigration from Ethiopia took the form of Aliyah of Rescue. Before 1977, Jews from Ethiopia were permitted to immigrate to the Jewish State until 1977 when the dictator, Mengistu Haile Mariam, came to power. During Mengisto's Marxist regime, many were persecuted for holding Jewish educational and Zionist activities, including Orit’s brother who was murdered by the regime. “I was a small girl but it pushed me, and my siblings, to make aliyah,” said Orit.

“Today I work at the Hanita absorption center and I do my best to help the new immigrants. For me that represents closure. I received help and now I am giving back to my brothers what I received. I want to help, very much,” Orit continued. “There are many blessings from my aliyah. My daughter Rebecca Avera is a Jewish Agency emissary, in her third year. My nephew, who made aliyah with us, received a PhD from the Technion he is doing a post-doctorate with the Fulbright Foundation, in electrical physics.”

The history of Ethiopian Jews immigrating to Israel is a point of pride for the Israeli government and The Jewish Agency for Israel. The two most famous airlifts from Ethiopia to Israel – Operation Moses (1984-1985) and Operation Solomon (1991) – are widely regarded as epitomizing both Israel’s importance as a place of refuge and its commitment to protecting Jews around the world.

Through the continued partnership of The Jewish Agency for Israel, the Government of Israel, and Jewish Federations of North America, there are more than 135,000 first- and second-generation Ethiopian immigrants now living in Israel.