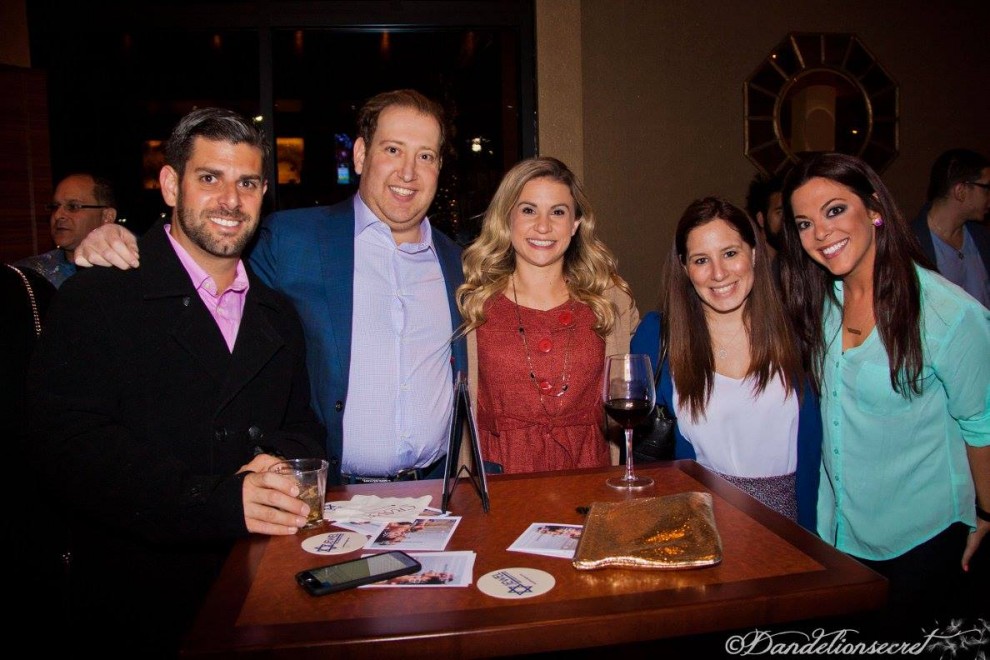 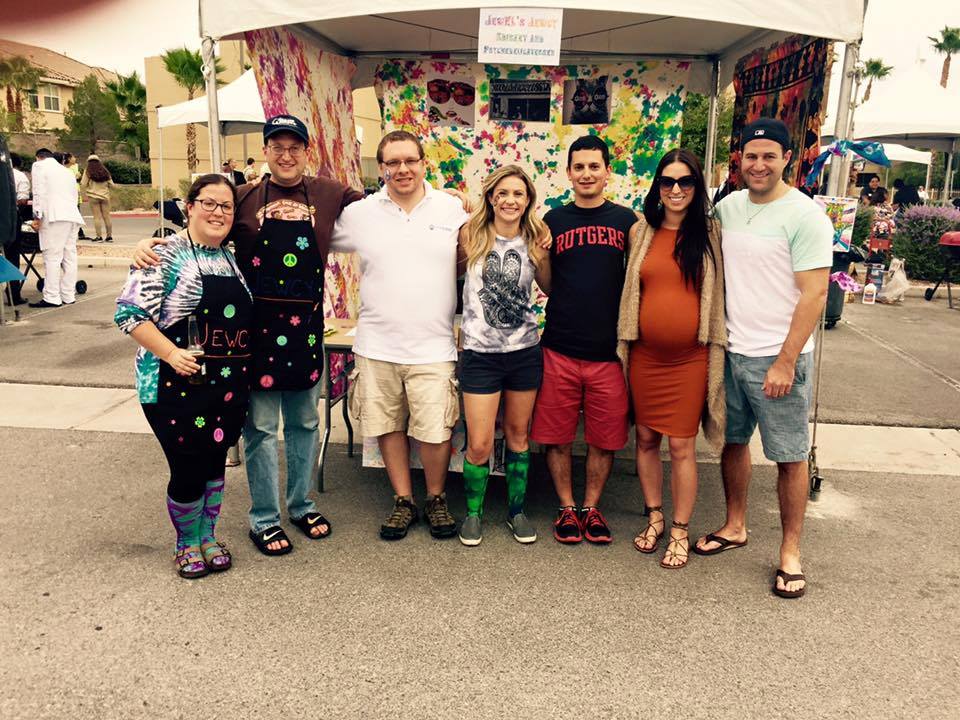 JewEL recently participated in both the J’s Annual BBQ Cookoff Competition and the J’s Ultimate Scavenger Hunt at Downtown Summerlin. “The JewEL Board has prioritized partnering with all our Jewish Community’s agencies and organizations this year,” noted Steinberg. “It’s important for JewEL members to support the entire Jewish community, not just JewEL and the Federation.” Marty Paz and Sandi Goldhecht took the lead on organizing the BBQ Cookoff team, JewEL’s Jewcy Brisket and Psychedelicatessen. “We put a lot of time and effort into making our special recipe,” noted Paz. “It turned our really delicious, but the competition was hard to beat!” Although JewEL didn’t take home first place, they did receive recognition for their booth design and team name. “It was great to be a part of a large scale Jewish community event,” noted Goldhecht. “We had a blast participating and loved supporting the J!”

JewEL also fielded a team for the J’s Ultimate Scavenger Hunt at Downtown Summerlin as part of their 8 nights of Hanukkah programming. “We had such a great time participating in the scavenger hunt,” noted Michelle Dahan, JewEL member. “Although we should have taken first place, we were happy with our second place award!” The JewEL team wore matching beanies that read Happy Challah Days and laughed their way through the challenges and riddles of the hunt. “We love participating in the scavenger hunt,” noted Steinberg. “We can’t wait for the next program!” 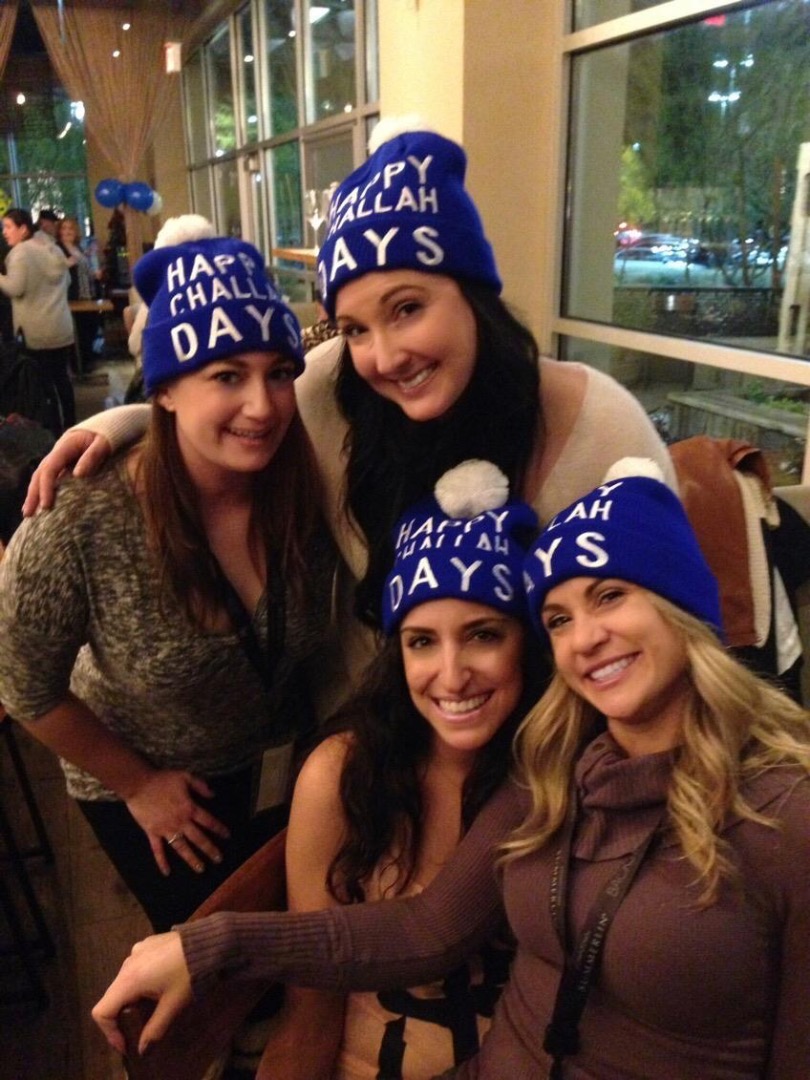 Each year, Jewish Federation’s of North America hosts their annual convening, the General Assembly (GA). This year’s GA was held at the Hilton in Washington D.C. from November 8th-10th, with more than 3,000 people from around the country in attendance. JewEL sent a delegation of 5 representatives to the GA in efforts to educate our young leaders about the national and global Federation movement. “Attending my first GA was a truly inspirational experience,” noted Sarah Steinberg. “There were so many phenomenal speakers that touched my heart and truly reinforced why I am involved so heavily in our Jewish community.  There was an overarching theme behind all of the stories, messages, workshops, and conversation.  It was about the inclusivity of the Jewish people and culture.  It reminded me of the Emma Lazarus poem inscribed on the Statue of Liberty.  There was no doubt our community was shouting the same ideas for all to hear. At the core of all of us, is Judaism.  The message was to come as you are because together, we are a unified people.  Together as Jews, we will follow through with the morals, values, and guiding principles that make us who we are.  We will continue to fight to rid the world of injustice beginning with our people but most certainly not ending there.” Eric Zawid, immediate past Chair for JewEL, was recognized along side 100 other young leaders by the entire GA body for receiving the David L. Simon Young Leadership Award in 2014. Delegates also had the opportunity to learn about best practices around the country, network with other Federation Young Adults, and hear from some of the most renowned speakers in the country. Some of the speakers at this year’s GA included Debra Messing, David Gregory, and Prime Minister Netanyahu. Next year’s General Assembly will also be held in Washington D.C. and JewEL looks forward to sending another delegation to support Sarah Steinberg for her Young Leadership award this year. 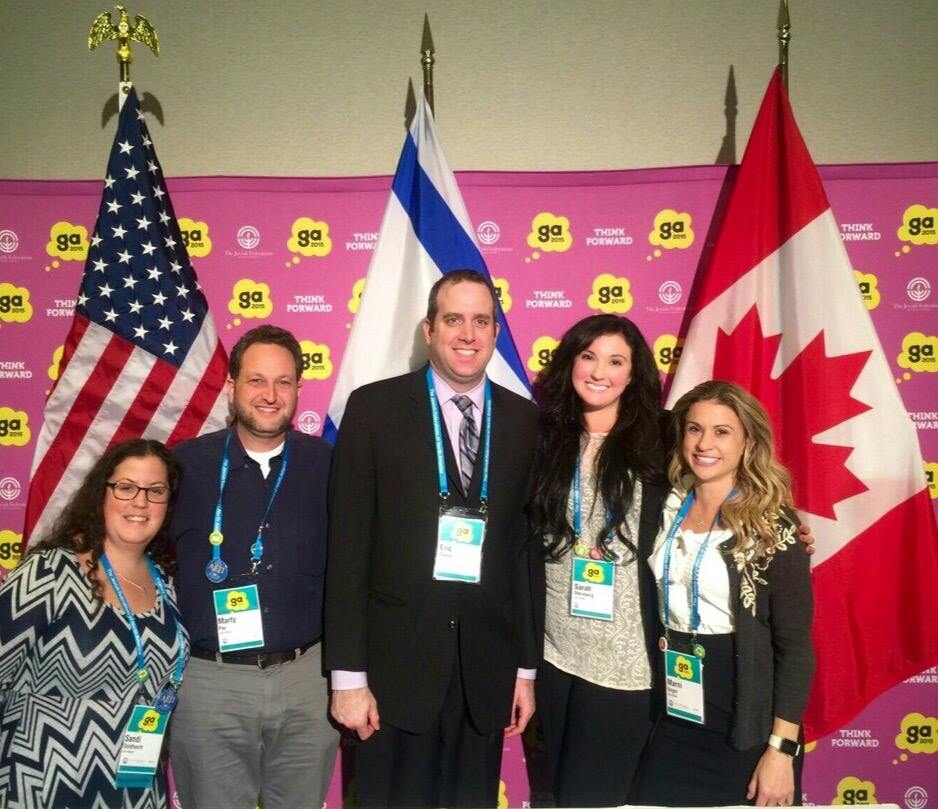 JewEL’s November Happy Hour was another hit with more than 120 people in attendance, including more than 30 brand new people. JewEL hosted its monthly happy hour at CRAVE American Kitchen and Sushi Bar at Downtown Summerlin on November 18th from 7-9pm. Attendees enjoyed a complimentary beverage, delicious appetizers, and fantastic raffle prizes. “This was one of the best happy hours yet,” noted Jen Specter, JewEL Co-Chair. “The food and drinks were delicious, the venue was perfect, and it was a great opportunity to see my friends and meet new people. We had over 30 people attend this Happy Hour that had never been to a JewEL event before.” The JewEL Board has also instituted a new education piece at Happy Hour each month. Each month’s happy hour focuses on educating JewEL members about the various agencies and organizations that the Federation supports. November’s Happy Hour supported JFSA and raised more than $600 to benefit JFSA. JewEL’s monthly happy hours continue to attract over 100 attendees, including many new young Jewish professionals each month. “Each month our Happy Hours continue to grow and attract more young Jewish adults,” noted Steinberg. “And after each one, everyone is already looking forward to next months!” 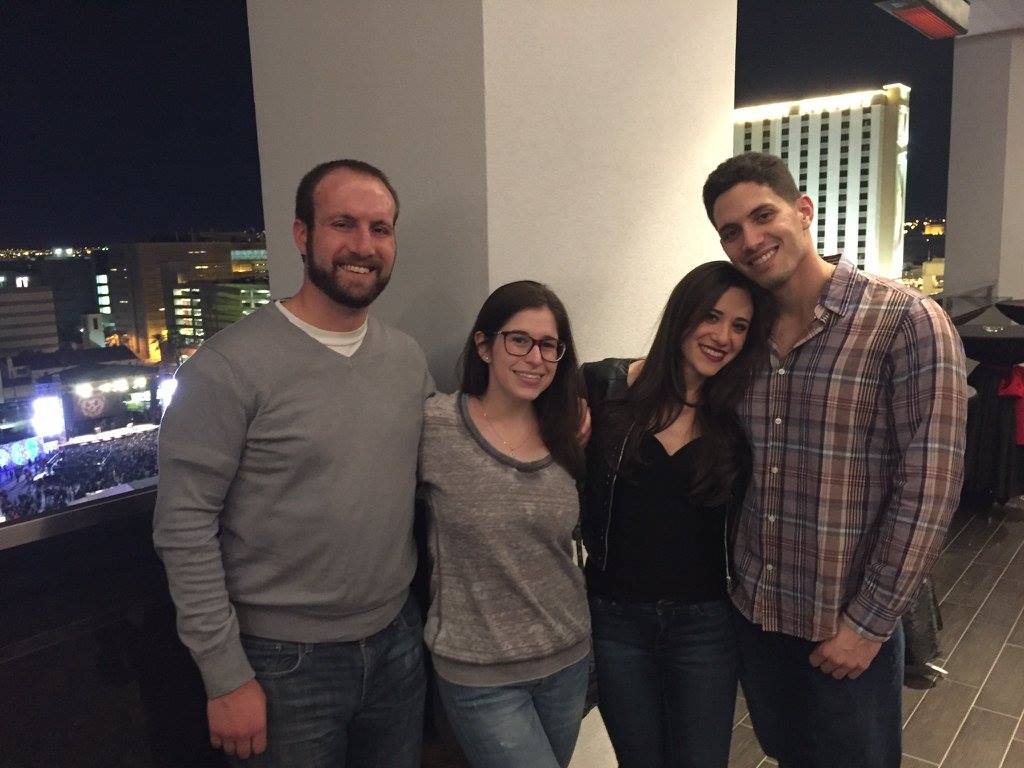 JewEL’s Young Couples cluster kicked off it’s programming with an unforgettable Downtown Date Night hosted at The D Hotel on Fremont with more than 17 couples in attendance. The evening was hosted on the brand new Traverse City Patio overlooking downtown Las Vegas and included an open bar, full dessert station, and exclusive flair bar tending demonstrations. “We had so much fun at the Young Couples Cluster event,” noted Aaron Spector, JewEL member. “Rachael and I loved meeting other young couples and actually re-connected with people who we grew up with in Vegas and knew through youth groups! Two degrees of Jewish separation.” JewEL’s YCC seeks to connect Young Jewish Couples to each other in fun and meaningful ways. 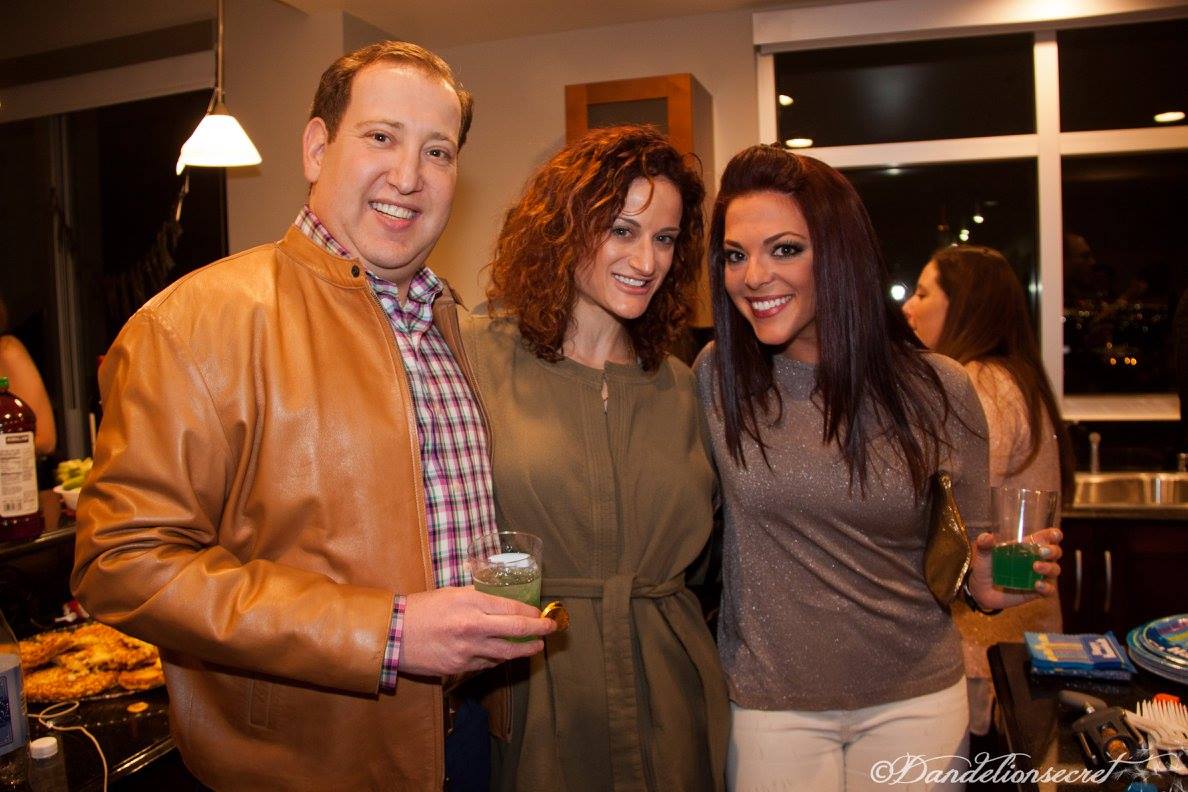 JewEL hosted a New Member Vodka Latke event for anyone who is NewISH to Jewish Las Vegas or JewEL in the past year on December 5th at The Ogden high-rise Downtown. More than 80 new members joined together for a fun and stylish event in loft-style apartment at the Ogden overlooking Fremont Street. The new member event brought together people who have been involved with JewEL for a few months but also people who have never attended a JewEL event before. “We wanted to thank our new members for getting involved with JewEL,” noted Sandi Goldhecht, JewEL New Member Co-Chair. “We had latkes, sufganiot, and desserts. We of course also had signature cocktails and a vodka bar to go with the event theme.” Attendees enjoyed socializing, playing dreidel, eating, drinking, and meeting new young Jewish professionals. “JewEL has engaged over 200 new members in the past year alone,” noted Meredith Katz, JewEL New Member Co-Chair. “Sandi and I are working hard (with the support of the JewEL Board) to not only recruit new members, but also engage and retain them! We have our work cut out for us and this event was a great first step!”

JewEL is the Young Leadership Division of the Jewish Federation of Las Vegas that connects young Jewish adults, ages 22-45, to the Jewish community through social events, professional networking, educational opportunities, leadership development, community service programs, and philanthropy. JewEL is dedicated to making a difference locally, in Israel, and around the world. If you are interested in getting more involved in JewEL, becoming active in a leadership position, serving on committees, suggesting programming ideas, or just want more information, please be in touch with Marni Unger, Young Leadership Director, at Marni@jewishlasvegas.com or 702.732.0556.