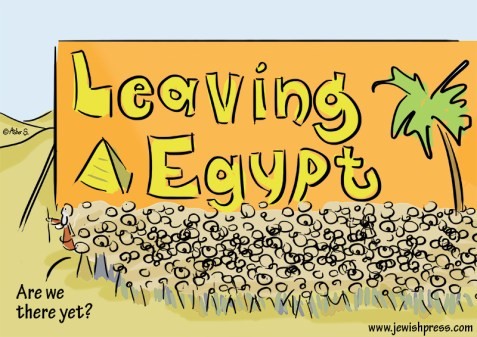 One of my favorite comedians, Louis C.K., has a routine about a guy complaining that his flight from NY to LA was delayed by 20 minutes.  Louis, brilliantly scolds the man, reminding him that he is being "Forced" to wait 20 minutes longer to experience the miracle of flight!  Additionally, Louis acerbically explains, that his fellow traveler is about to embark on a five hour trip that, if he were born 100 years ago, would have taken a month in a horse drawn wagon.  Louis's point was, and is, that it's all relative and we shouldn't complain too much about our "First world problems."   As a Jewish Community, we have reached the time of year that provides us with a great opportunity to follow Louis's example and re-evaluate our problems.

While Yom Kippur - the day of atonement - get's the bulk of the exaltation as a time for self-reflection, I believe that Passover is equally as significant a time for introspection.  Passover provides the Jewish community with an opportunity to view our circumstances through the lens of the tyranny and oppression that our ancestors experienced in Egypt.  Using the brutality of Pharaoh as a benchmark quickly reveals that worse things have happened in the history of the Jewish people than the "First world" problems with which we are dealing.

Now, before an angry mob heads to my office with pitchforks and torches, I am of course not speaking about terminal illness or anything that severe.  Circumstances like these are profound and no one should ever minimize their impact.  I'm talking about the moments when we equate standing in a coffee shop line for more than 3 minutes to be as onerous as Shackelton's sojourn on Antarctica.  Social media is filled with outcries of pure tragedy that range from sluggish service at a restaurant to slow wifi.  Do we think that those at the end of the column of tribes leaving Egypt complained about the pace at which the tribes were walking.  Despite heading into an unknown fate in the wilderness, they probably didn't complain as they were walking away from generations of oppression.

There are several anecdotes and lessons that can and have been pulled from the Passover story.  But the belief that things will get better, if you commit to the message and the cause, can not be repeated enough.  Yes, there are times when we may feel like all is lost, like there is no way out, and that we are out of options, but the same was true for the Israelite's.  Our forbears who were in Egypt when, "There rose a Pharaoh who knew not Joseph," thought that their world and people had come to it's end, never again to experience freedom.  It took a person with an unwavering sense of obligation to his people to show them that there was still an opportunity for salvation, for redemption, and for freedom.  Soon, after a bit of theatrics, the displacement of some water, and a few other actions, the Israelites's faith was rewarded.

Many people in our community are dealing with significant issues and circumstances.  Many of them suffer in silence out of fear of being stigmatized or persecuted even further.  Others have no voice, no recourse, and feel as though they have no place to go.  The organized Jewish community of Las Vegas must make it clear that we are the voice that they seek.  We are the rally point around which they can regain their freedom and seek justice.  We are the place to which they can turn.   We have first rate professionals in our Las Vegas Jewish community at our schools, synagogues, and agencies.  No one should ever feel as though they can not come forward in an attempt to find help.  More importantly, our community must proactively project that we are seeking those who are suffering.  We want to help, we want to bring them out of the darkness, we want to be their salvation.

This Passover, we should remember to not harden our hearts like Pharaoh.  And just as we are instructed to clean our homes, we should also clean our hearts and minds.  We should re-examine our priorities, set aside our "First world" problems, and find the essence of what will ensure that we are doing what we can do for our people and our community.