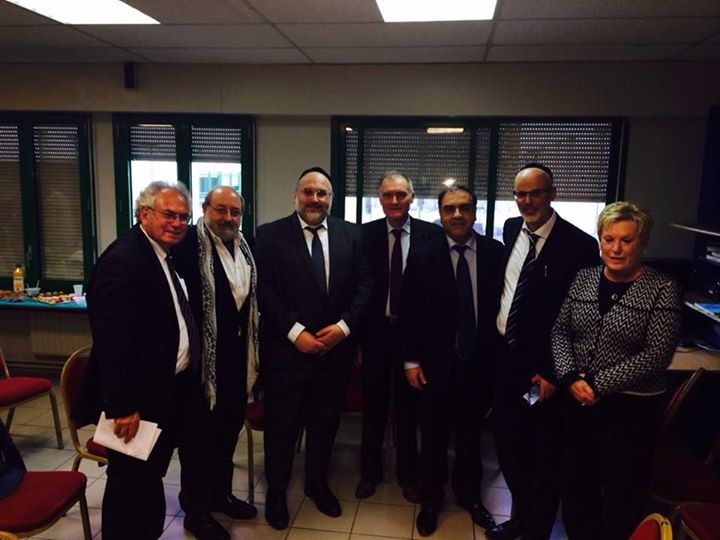 France could be called the Tale of Three Jews.

The first Jew is most likely Ashkenazic, and either comes from several generations of French descent or has succeeded financially in French society. This Jew is affiliated with the French community-at-large.

The second Jew is most likely Sephardic, perhaps of North African in origin, who is at most, second generation born in France. He or she is Orthodox and likely poor. This Jew is also affiliated with the community-at-large.

The third Jew is the one we did not meet. This Jew represents at least one third, but, perhaps, up to 50 percent the Jews in France. He or she is unaffiliated with the community-at-large.

For all the Jews we met, and I suspect, including those in the third group, the most influential recent event that impacted their lives as Jews living in France, occurred on July 29, 2014. It was a day of mass demonstrations against the "Israel War against Gaza." It was a day in which shouting of death to the Jews was heard in the streets of Paris.

This date marked increased instability in Seychelle, a town 30 minutes from Paris, with a population of 60,000, including a Jewish population of 15,000. Even though a demonstration permit for a march against Israel’s actions in Gaza had been denied by the police, as the march’s route was to run by Jewish schools and synagogues and in heavily Jewish neighborhoods, the demonstration still took place.

For several hours anti-Semitism in the streets was widespread and boisterous and included, attempts at kidnapping and rape. Jews could be seen fighting  off their attackers with sticks. What happened later at Charlie Hebdo and Hyper Cache had just upped the ante, the game was already in progress. To a person, those with whom we met, be they Jew-one or Jew-two, believed that the recent marches were about the French and France, not about the Jews. There is widespread view that many of those who marched in the streets in solidarity with Charlie Hebdo in January were or could have been the same as those who marched in the streets in July.

World War II is not over in France. You can walk the streets of Paris noting the plaques on buildings from which Jews were deported. You can listen to the young non-Jewish cab driver describe buildings that were used by the German Army. And you hear about World War II from nearly all the Jews, now focused on anti-Semitism and the growing Islamization of France.

Six members of our group met with the Deputy Foreign Minister Laurent Fabius. He came to the meeting with five of his senior aides responsible for different policy issues, except Israel. His message was clear, tell your people not to leave, tell those making political hay out of the troubles for the Jews to please stop. He was clear that security was not his responsibility and did not address the issue. The official support for Jews and against anti-Semitism is constantly on display. The question can be asked, is this support sincere or because anything else would be viewed as embarrassing to France. The same so-called support for Israel does not exist.

Tali Ochayon is the director of SPCJ, (Protection Service of the Jewish Community) the organization for security within the Jewish community. She describes a society that generally assumes that the government is responsible for most things, including security. She is not happy about the military "occupation" of Jewish schools and synagogues. She does not think it will last and is not sure if the military sees itself as protecting Jews or protecting France. The military presence also lessens the vigilance of the parents and shul-goers, themselves.

The SPJC, most significantly funded by its chairman, a member of the Rothschild family, is like our own SCAN. It teaches security prevention techniques, awareness and vigilance to the Jewish community, last year training more than to 10,000 parents how to be alert when bringing their kids to school alone. It is trying to better equip Jewish institutions with cameras, gates, guards etc., but there are not enough resources. In this respect, the Jewish Agency has been helpful and with additional funds from our federations, could be even a more important partner.

In the school year 2012-2013, the Chief Rabbi of Seychelle certified 200 people as Jews so they could open their Aliyah applications. In the following year, it was 350 such letters. Since September, he provided documentation for nearly 1,200 of his flock, in order to begin the Aliyah process. I asked him, if he would he still be Chief Rabbi of this community in five years’ time.  He replied that "In five years there will be no Jews in Seychelle, except the very, very poor and the old. They will need welfare and nurses. Rabbis will not be of much use."

The tale of these three Jews is why we must act as a collective. For the third group of Jews and for some, in the first two groups, as well. we have to help to build positive Jewish identity. Masa is one example. The curriculum and activities prepared by Makom are terrific. We should be flooding France with young energetic, dynamic outreach shlichim.

For all the Jews we must stand in solidarity, remind our own government to be supportive as well, and understand that France is in the fight against radical Islamic Jihad.

For the second group of Jews, we must prepare and support this new Aliyah of social rescue. These Jews are in the lower economic classes.   According to this group, what they need the most, is to make Aliyah and to be able to find a good job in Israel. The Jewish Agency is doing a fantastic job serving the needs of those who wish to make Aliyah. We, through the Jewish Agency, and as the American Federation system, need to press the Israeli government to provide more assistance for these folks to have a successful klitah (absorption in Israel) and to attain employment.

We used to say that We are One. The expression demonstrates our highest aspirations of collective action, of love of the Jewish people, and of making the world a better place. We need to aspire to be One.

Samantha Dubrinsky was one of the mission participants this week, a young staff member of the Birmingham Jewish Federation. She wrote about her views in daily dispatches back to the federation. I end with a passage from her report from our last day in Paris.

When BJF Executive Director Richard Friedman was raising funds to underwrite my trip, donors responded quickly to Richard's appeal by saying yes. "This is what we do," one donor wrote. "This is one Jew asking another Jew to help a third Jew," he continued, a sentence often heard in the Jewish world. However, none of us can ever be certain as to which Jew we will be -- the one asking, the one giving or the one who needs help. Right now, the French Jewish community, the world's third largest in size, needs our help. It is our time to give because we are family, no matter the distance, no matter the circumstances.