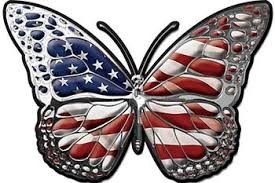 Every four years I am filled with a sense of excitement and trepidation. With the arrival of the Presidential election comes the metamorphosis of people from all different walks of life into full-fledged political scientists. Like butterflies some of our friends, family, and colleagues come out of their chrysalis and morph into political pundits with huge colorful wings (usually red or blue). They spread their opinions across social media, at dinner parties, and whenever there are two or more people present.

These political butterflies create a great deal of discourse during the election cycle.  But this flurry of activity must not blind us from the fact that the ability to have discourse is what makes our country so incredible. The vast majority of those actively advocating for political candidates understand the rules of the game and understand that we are all, the end, Americans. We all want a better future for our children, safety for our loved ones, and the freedom to live as we please within the law. We should carry ourselves like professional athletes who compete at the highest level during the game, but also make a point of shaking hands at the end of the game. I do not believe that those who are featured in the media are the true representation of the average American who is advocating for their party or candidate. Unfortunately, those who make incendiary remarks get the most airtime and create the most traffic for call in shows.

As crazy as this election cycle has been, we should find a great source of pride in this Presidential process which included an African American, two Cuban Americans, Women, Political Newcomers and Veterans, and a Jew. All of them received a substantial amount of support from people of all different races, faiths, and generations. It's really been a remarkable time in our country and we should be hopeful for our future as we watch hurdles being cleared for people of all persuasions, races, faiths, and genders that would have never been considered just a few decades ago.

So, in a few short weeks, the season of the political scientist butterflies will have passed and our Facebook feeds will once again be filled with invitations to play mindless internet games. When the season passes we will have a new President and we know that it will be one of two people. What we also know is that we will still have to live next to each other, shop in the same stores, send our kids to the same schools, and need the same forms of sustenance. Let's try to keep this in mind and set a good example for our kids that we can have our differences and still remain neighbors, friends, and colleagues.