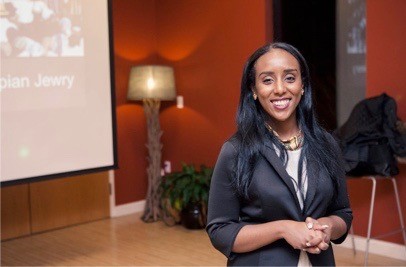 The Jewish Federation of Las Vegas (JFLV) and the Israeli American Council of Las Vegas (IAC) are excited to announce the arrival of our community's new Israeli Emissary, Rebecca Avera.

Rebecca joins our community through a partnership with the Jewish Agency for Israel, JFLV, and IAC.  She is charged with strengthening our community’s connection to Israel and the Israeli people.  Additionally, Rebecca will serve as an Israel Fellow on the campus of UNLV.  Rebecca will provide educational programming for the entire Jewish community and will also serve as an advocate for Israel within both the Jewish and broader community.

Rebecca Avera is 29 years old and is a native of Haifa, in northern Israel. Rebecca's parents moved to Israel from Ethiopia during "Operation Moses" in 1984. Today Rebecca has five siblings, and she is the second oldest.

At the age of 18, Rebecca drafted to the army and served in the Military Police. In this capacity, Rebecca was stationed at several checkpoints throughout the West Bank, working to prevent terror attacks in Israel. After the army, Rebecca decided to follow her dream by enrolling in the IDC Herzliya as a Government Diplomacy and Strategy student.  During her time at IDC, Rebecca had the privilege to take part in a delegation of seven students to be in South Africa during "Israel Apartheid Week."  Rebecca and her cohort worked on campuses throughout South Africa and to make the case for Israel.

Rebecca spent two months volunteering at the Holocaust Memorial Museum in Washington and has traveled to England to speak with communities, students, and individuals about her Jewish identity as an Ethiopian-Israeli student. Rebecca is joining our community after completing her service as an Israel Campus Fellow at the Stanford University Hillel.

Please join the leadership of JFLV and IAC in welcoming Rebecca to our community.